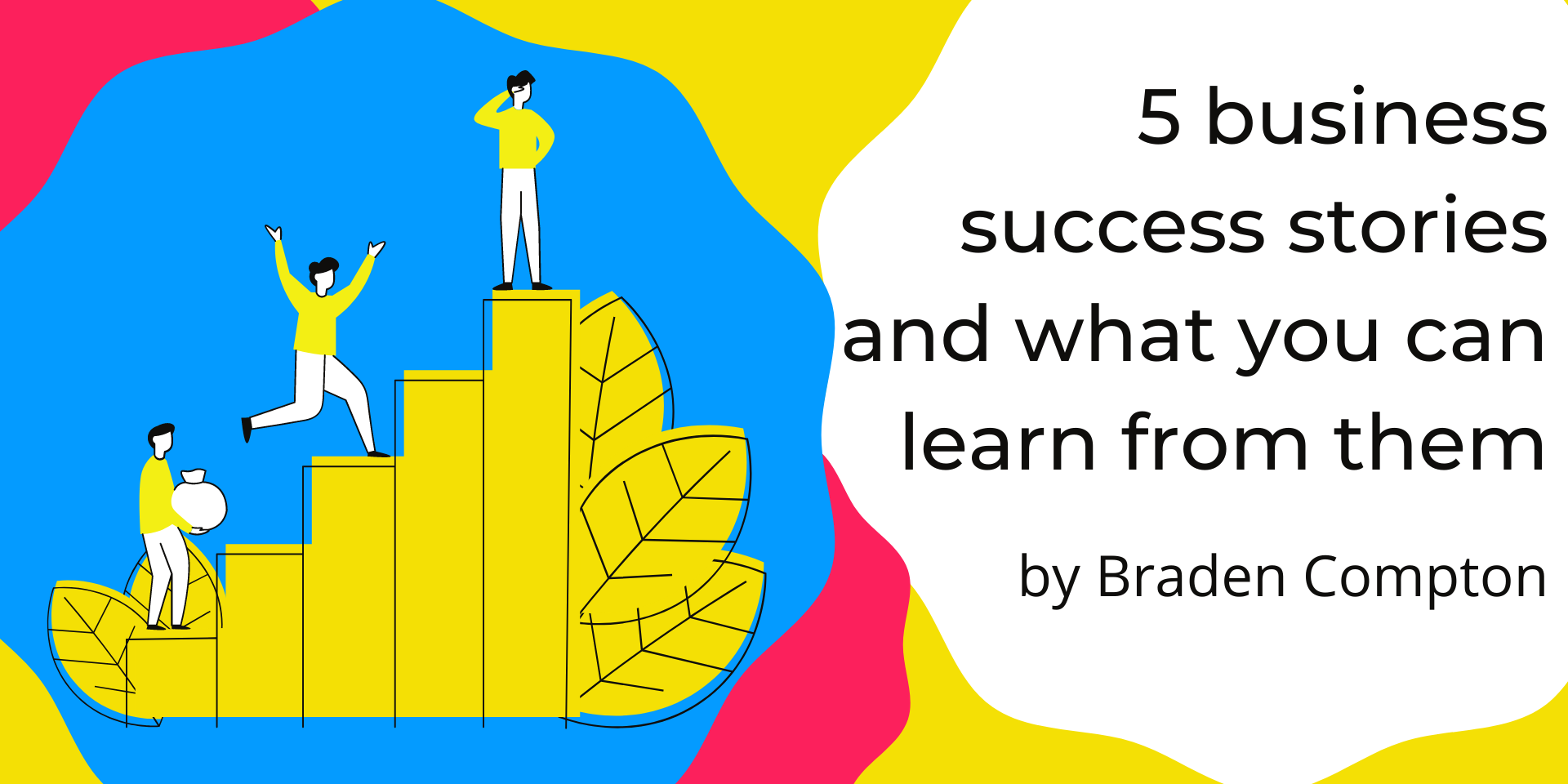 5 business success stories and what you can learn from them

Starting a business is a difficult and lengthy process. It takes real imagination to think of an idea and then takes patience, dedication and a lot of hard work to turn that idea into a flourishing company. There are many businesses out there whose success over the last few years can serve as an inspiration for your own business ambitions. That is why we have compiled a list of companies who have done extremely well in the last few years and explained how and why they have had so much success. We have also included lessons you can learn from each of these businesses and how knowing these tips can help you in your own professional pursuits.

The first company on our list is Canva. Canva is a free to use graphic design platform that allows you to easily design logos, social media posts, leaflets and more using professionally created templates. Canva was founded in 2012 by Melanie Perkins, her partner, Cliff Obrecht and Cameron Adams and is headquartered in Sydney, Australia. Since 2012, Canva has rapidly increased in popularity and gone from strength to strength. It now has approximately 1,500 employees and has become the first choice for many companies and individuals who need to do graphic design. It has an average of 30 Million monthly users and is available in 190+ countries. This success is clearly seen in Canva’s valuation which sits at around $15 Billion (just under £10.9 Billion). This whopping valuation has made Canva one of Australia’s most successful ‘Unicorns’ – a privately owned company that has a valuation of over $1 Billion dollars.

Canva has a lot to credit to its success; these include the ingenuity of its founders who saw a gap in the market that they believed they could fill and an excellent team who have created a simple, easy-to-use platform that gets the job done. Other reasons for its steep rise in success include its impossible-to-beat price and its ease of use. Millions of users on Canva don’t pay anything while still being able to create high-quality graphics. This means that Canva is in a position to beat rival products such as Adobe which is both expensive and more difficult to use.

But one of the main reasons for its success is that it stuck with its original idea; the founders wanted to create a simple solution to graphic design and made that their main mission. They knew that customers wanted an easy way to do graphic design while also paying reasonable fees and so stuck with that vision and made the customers needs their main priority. They stuck true to their original idea. So remember, when starting out in business, think of your core mission and stick to it.

The second business on our list is Zoom. Zoom, which is headquartered in California, is a communications company that specialises in cloud-based video conferencing and was founded in 2011 by Eric Yuan. It allows you to have calls or conferences with anyone on the planet in groups up to 1000 people. Although Zoom is now one of the biggest video communication providers out there, this wasn’t always the case. Prior to the Covid-19 pandemic, Zoom had an average of 10 Million people logged in daily but once people started going into lockdown the number of uses Zoom had rose. During the Covid-19 pandemic it was used by businesses, universities and schools and even everyday people. This caused the number of daily users to skyrocket by a staggering 2900% to 300 Million daily users! This sudden surge in users and the subsequent success is reflected in its $139 Billion valuation.

The lesson you can learn from the rise of Zoom is; makes things simple. Zoom as an application isn’t difficult to use. Anyone can use it effectively to call friends, family or colleagues. You can quickly and effortlessly join or set up a call and once you are in the call you have the choice of changing a whole host of settings. Consumers don’t want to be overburdened with a difficult process. They just want to use your product to do what they need to do. So when making business decisions, remember to make things simple.

Gymshark is a clothing company that specialise in sports apparel and gym wear. It was founded in 2012 by Ben Francis and Lewis Morgan and is headquartered in Solihull. Since being founded it has grown from a few people to having a workforce of over 400. Its products are sold in over 180 countries and made a reported £260 Million in 2020. It was also said to be one of the fastest growing fashion brands in the UK in 2016. It was recently reported to be worth $1.3 Billion.

Gymshark has gained its success through a variety of methods. These include designing clothes that appeal to an increasingly larger audience who are focused on fitness and exercise, but one of its most widely used strategies is its use of social media. It used free social media apps like Instagram to boost their outreach and gain more interest. They saw that the industry surrounding influencers was massively increasing and so decided to turn a number of influencers into brand ambassadors. They then sent these ambassadors free Gymshark products in exchange for promotion. This meant that their products were seen by a much larger audience in a much shorter amount of time. This, paired with their designs that matched functionality with fashion, saw their sales increase steadily over a few years. So the lesson to be learned from Gymshark is that you should use marketing strategically. Use all avenues at your disposal and think innovatively to boost your outreach.

The fourth company on our list is Deliveroo. Deliveroo is an online food delivery company that was founded in 2013 by Will Shu and Greg Orlowski. Since being founded, Deliveroo has amassed a customer base of nearly 7 Million and is now estimated to be worth around £7.6 Billion.
Deliveroo found its success by figuring out a way to cater to all the customers who use their service. By improving the standards they upkeep in relation to both customers who order food and the restaurants who prepare it, they have ensured that they have created a brand loyalty with a customer base who trust their service to consistently use it.
The lesson learned from Deliveroo’s success is that to create a successful product or service you have to make sure that everyone who uses it are content as this builds a brand loyalty which brings in customers.

Chilly’s are a company that started out making reusable bottles but who now also do reusable coffee cups and food pots. Chilly’s was founded in 2010 by James Butterfield and is based in the UK while the manufacturing of their products has been out-sourced to China. Since being founded, Chilly’s has rapidly grown and was No.6 in the Sunday Times Fast Track 100 in 2020 with approximately £44 Million in sales.

Chilly’s have garnered success by revolutionising the water bottle. They have turned the water bottle into a functional fashion accessory that people want to buy. Their water bottles are desirable. They have also caused a stir in the industry by being one of the first main-stream eco-friendly and sustainable water bottle companies. This forms the basis of their brand identity. By making their bottles reusable they have stepped away from single-use plastic bottles and have connected with a large audience who are more aware and more concerned about their individual impact on the environment but who at the same time want a product that is fashionable, functionable and reasonably inexpensive.

The lesson to learn from Chilly’s success is that a good idea solves a problem. The founder of Chilly’s wanted a bottle that kept his water cold or warm for a long period of time while also being aesthetically pleasing. This led to him creating the design for Chilly’s. His product not only fits in with increasing sales in the water bottle market but also joins the trend of products created by companies aiming to be more environmentally aware. So remember, a great business idea has to have the solution to a problem at its core.

Follow on from this article by reading ‘Top 5 Tips: How to set goals for the next year‘.

Check out Revolancer and see how we can help you on your freelancing journey!

Why You Should Start Freelancing
8 September 2022

Top 5 freelancing skills that pay the most
6 September 2022